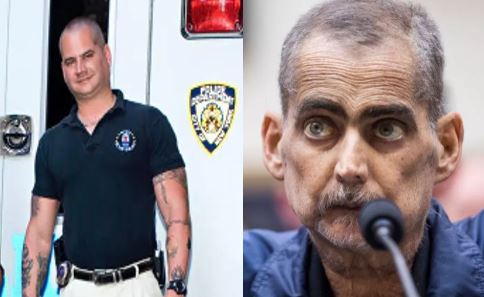 One of the first titles Luis Alvarez earned was that of Marine, then Police Officer with the NYPD. After earning a promotion to Detective, he worked most of his law enforcement career in the Narcotics Division. He then became a member of NYPD’s elite Bomb Squad. For the life of me, I always wondered why any police officer would want that job. But Detective Alvarez became a “Bomb Technician” preventing bombs from detonating and detecting who and how someone had used an improvised explosive device in New York City. But Luis Alvarez also had three other important titles, one being husband and the other being a father to his three sons.

On September 11, 2001, as thousands ran from Ground Zero numerous heroes raced to the World Trade Center to see how they could render aid and assistance. As Detective Alvarez stated “9/11 happened. We got called down. It’s my job as an NYPD Detective to respond to emergencies. So, no hesitation.” Alvarez like so many others worked on the pile at Ground Zero for months trying at first to rescue individuals and then to recover those who had perished at the hands of terrorists. At the World Trade Center, the Pentagon and Shanksville, first responders were exposed to jet fuel, diesel oil, and chemicals like asbestos, carbon monoxide, hydrogen sulfide, crystalline silica, and other metals and particles as well as toxic soot and dust from pulverized building materials. After serving for 20 years with the NYPD, Detective Alvarez retired and started a position with the Department of Homeland Security. But his service there was cut short when he was diagnosed with colon cancer from his time on Ground Zero.

On June 11, 2019, Luis Alvarez appeared before a House Judiciary Subcommittee hearing to urge Congress to reauthorize the September 11th Victim Compensation Fund along with Jon Stewart. The Committee hearing room was packed with 9-11 first responders. Alvarez’s soft but powerful words showed what a courageous and humble man he was. He wasn’t seeking notoriety or fame as he lobbied the Subcommittee. “I did what every other FDNY, NYPD, EMS worker-everybody. I’m nobody special. I did what all the other guys did. And now we’re paying the price for it.” But Luis Alvarez has always been special. He knew a life of true selfless service to others, a rare commodity today. He also knew that his time was short on earth. He was worried about his family and those families of other 9/11 Responders in the future.

Alvarez and comedian Jon Stewart appeared before the Congressional Subcommittee begging for something that Congress should have addressed long beforehand. Jon Stewart’s comments that day rang so true when he chastised Congress for not doing what was right. Seeing Alvarez’s hollowed frame that day one might never have thought he had been a Marine or a fit NYPD Police Detective. He had already undergone 68 chemo treatments and was slated for another one in less than 24 hours. Even without knowing his medical story his hollowed frame,  huge eyes, and a soft voice told all the fate that awaited him. “You all said you would never forget. Well, I’m here to make sure you don’t. You made me come down here the day before my 69th round of chemo. I’m going to make sure you never forget to take care of the 9/11 Responders.” These words were uttered by a selfless brave American hero-Alvarez’s last title.

Luis Alvarez can speak no more. He passed away today from cancer that destroyed his body. Every day first responders are dealing and will continue to deal with the impact of the terrorist attacks on September 11th.  Since 9/11 there have been over 2500 reported cases of cancer among World Trade Center first responders. I think of two first responders FBI Special Agent Melissa Morrow and Officer Harvey Snook who passed away due to illnesses contracted due to 9/11. I have spoken to numerous first responders that searched for human remains to return to their families. The number of casualties from September 11th will continue to grow and we all have a responsibility to never forget the actions of brave humble individuals like Luis Alvarez-a selfless American hero.