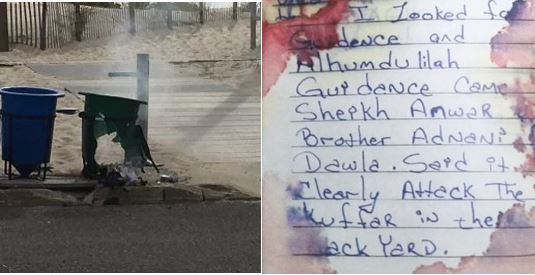 On the morning of Saturday, September 17, 2016, as runners gathered for the Seaside Semper Five Marine Corps Charity 5K race, a terrorist had another idea-to kill runners at a road race. The race provides resources for the Marine Corps and Marine Special Operation Command (MARSOC) Foundation to help those who have sacrificed the most. The terrorist placed three pipe bombs in a trash can along the race course. The One Mile Fun Run race was to start at 9 a.m. followed by the 5K Race but due to heavy onsite registrations the race’s start was delayed. Because of the delay no runners where by the trash can that contained the explosive device. One of the three pipe bombs detonated causing the race to be cancelled.

The One Mile Fun Run is usually run by kids. Clearly the terrorist had no problem targeting not only the charity run but also seemed to want to target the fun run. Ahmad Khan Rahami wrote in his journal “in the streets they plan to run a mile.” I think back to Martin Richard, an eight-year old spectator who was out to watch the Boston Marathon with his family. Richards, was killed, his sister lost a leg and his mom had severe brain injuries when Dzhokhar Tsarnaev left a backpack with a pressure cooker bomb among the spectators watching the finish of the race.

Ahmad Khan Rahami sought to follow in the footsteps of the Tsarnaev brothers. Just as the Tsarnaev brothers had no qualms about killing and injuring kids, families, runners, and spectators, Rahami wanted to start his killing spree by attacking a road race. In 2014, over 8 million individuals finished 5K races across America. We have now had two instances, the Boston Marathon and the Seaside Semper Five race where terrorists have attacked a road race in America. Ahmad Khan Rahami was manipulated and motivated by the words of Al-Qaeda in the Arabian Peninsula’s Anwar Al-Awlaki, who was killed in a drone strike in Yemen and Abu Muhammad Al-Adnani, the deceased Islamic State’s spokesman. Rahami wrote in his journal “You (USA Government) continue your (unintelligible) slaughter against the mujahidean be it Afghanistan, Iraq, Sham (Syria), Palestine . . . .”

The Tsarnaev brothers used pressure cooker explosive devices to attack the Boston Marathon on April 15, 2013, killing 3 and injuring 264 individuals. The two terrorist brothers learned to build their pressure cooker bombs after going online to Inspire Magazine. Inspire, a colorful propaganda effort was the work of Anwar Al-Awlaki and Samir Khan of Al Qaeda in the Arabian Peninsula (AQAP) in Yemen. Rahami also used pressure cooker bombs at the West 23rd Street attack and at West 27th Street. The Tsarnaev brothers killed an MIT Police Officer Sean Collier and engaged police in a gun battle. Ahmad Rahami shot two Linden police officers who suffered non-life threatening wounds before he was shot and apprehended. Rahami mindset is clear with his own statement in his journal stating “I beg (unintelligible) for shahadat (martyrdom) & Inshallah (God willing) this call will be answered.”

Rahami’s handwritten journal gives some insight into the mindset of a radicalized terrorist in our backyard and the dangers these individuals pose even at an athletic event such as a road race. Rahami closes his journal entries with “Inshallah (God willing) the sounds of the bombs will be heard in the streets. Gun shots to your police. Death to Your OPPRESSION.”

Rahami clearly has never been a runner. He doesn’t know that obstacles for runners are just part of the course. Hills, rain, cross winds, weather, pain are just part of the race. He doesn’t know that running is addictive. The Seaside Semper Five Race was a charity fundraiser to raise funds for the Marine Corps and the Marine Special Operations Command (MARSOC) Foundation. Rahami clearly doesn’t know anything about the Marine Corps. The motto of MARSOC is unconquerable spirit. This race has an unconquerable spirit and this Sunday, September 25th, the race will go on. For as Roger Bannister stated “the human spirit is indomitable.”

This Sunday the sound of a starting gun will be heard in Seaside, New Jersey followed by the sounds of runner’s feet making their way along the race course. Spectators will cheer even more loudly for the runners. Police officers will ensure the course is safe for all. And I suspect, next year record numbers of runners will sign up to run this great race just as record numbers signed up to run the Boston Marathon in 2014. The American Spirit truly is indomitable. For more information about the race see the link below or make a donation to the MARSOC Foundation and support those who are “Always Faithful.”