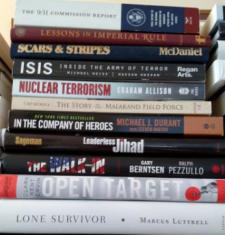 I am often asked “What are you reading? What have you read? and What should I be reading?” Depending on who is asking and the topic of interest, I have different lists of books for individuals interested in terrorism, asymmetric warfare, tribes of the NWFP, law enforcement, histories and general reading. Some of the lists are eight to ten pages long, other topic lists a mere three pages. With an office library and a home library I can be like Thomas Jefferson when it comes to purchasing books. Even with a Kindle, the number of books I have purchased has actually increased. I do love a good hard covered book but with a Kindle, I can carry and catalog hundreds of e-books on this marvelous electronic device.

In July 1771, Robert Skipwith asked Thomas Jefferson for some help in choosing some books to “absorb culture as painlessly as possible by reading the smallest amount of well-selected books.” Jefferson sent Skipwith a list of 148 titles that comprised 379 volumes.

On my office desk, I am reading Playing to the Edge by Mike Hayden. By my nightstand, is a copy of The Immortal Irishman: The Irish Revolutionary Who Became an American Hero by Timothy Eagan. I am finding Eagan’s book hard to put down at night and have now tried to limit my nighttime reading. Eagan writes about the life of General Thomas Meagher who commanded the Irish Brigade during the Civil War and his flight from Ireland. Here are just a few books not in any order that I would recommend everyone read.

Who Becomes a Terrorist and Why: The 1999 Government Report on Profiling Terrorists
By Rex Hudson

The Shia Revival : How Conflicts within Islam Will Shape the Future
By Vali Nasr

Through Our Enemies’ Eyes
By Mike Scheuer

Powerful Peace: A Navy Seal’s Lessons on Peace from a Lifetime at War
By J. Robert DuBois

The Peloponnesian War
By Donald Kagan

Scars & Stripes: The True Story of One Man’s Courage in Facing Death as a Vietnam POW
By Eugene B. McDaniel, Capt. USN (Ret.)

The Story of the Malakand Field Force
By Winston Churchill

In the Company of Heroes
By Michael J. Durant and Steve Hartov

The Walk-In
By Gary Berntsen

Manhunt: The Ten Year Search for Bin Laden From 9/11 to Abbottabad
By Peter Bergen

Hunting Season: James Foley, ISIS, and the Kidnapping Campaign That Started a War
By James Harkins

Rebuttal: The CIA Responds to the Senate Intelligence Committee’s Study of Its Detention and Interrogation Program
Edited by Bill Harlow

Objective Troy: A Terrorist, A President and the Rise of the Drone
By Scott Shane

The Valley’s Edge: A Year with the Pashtuns in the Heartland of the Taliban
By Dan Green

Matterhorn: A Novel of the Vietnam War
By Karl Marlantes

Dereliction of Duty
By H.R. McMasters